We have already driven the VW Transporter T6.1 facelift and have a full reviewavailable for you to read.

However, if you’re after information about UK pricing and spec, keep reading.

Volkswagen Commercial Vehicles has now started taking orders for the facelifted Transporter, which arrives in dealers in March 2020.

Officially designated the T6.1, first sight of the heavily revised medium load-lugger came in February 2019 when the Multivan – that’s the European version of the Caravelle passenger carrier – was unveiled at a swanky event in VW’s Wolfsburg HQ in Germany, timed to coincide with the 70th anniversary of the first VW Transporter prototypes being built and revealed in the very same location. 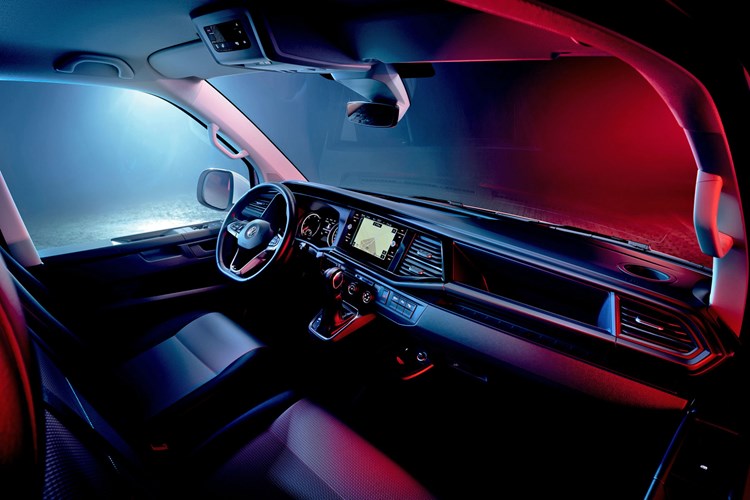 This was followed in April 2019 by the T6.1 Transporter van proper, which broke cover at the 2019 Bauma constuction machinery show in Germany. 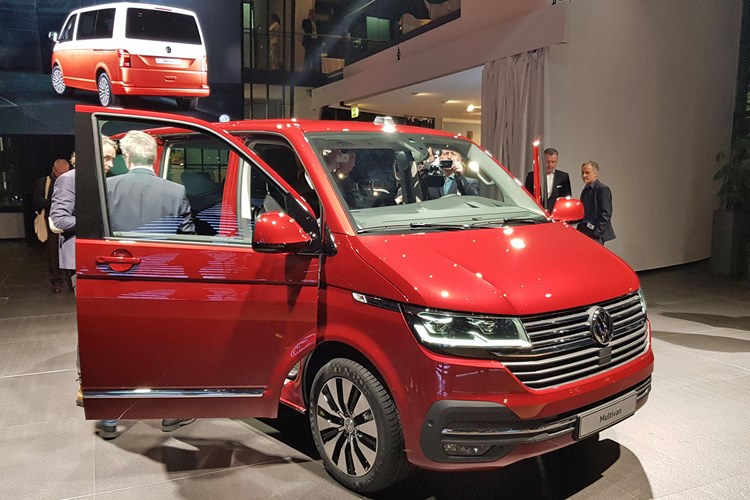 VW is describing the new T6.1 as ‘perfection improved’. And no matter how perfect or imperfect you think the current T6 Transporter is, this revised version certainly is packed with exciting features.

And ‘exciting features’ isn’t a phrase often used to describe a van.

The first thing you’re going to notice is the new front end. The grilles that were previously separated have been pushed together to create one very large air intake. This happens to help the van look wider, but is apparently also necessary for technical reasons, in order to meet the latest engines’ cooling and breathing requirements. More on these below. 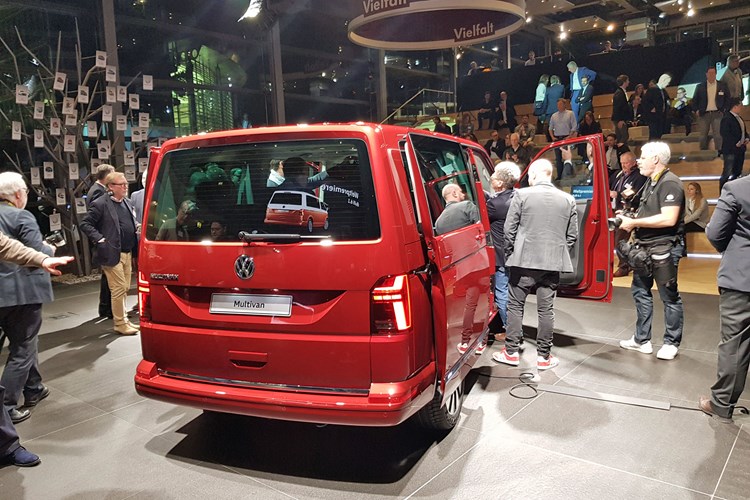 Inside you’ll find a completely overhauled dashboard, which not only manages to provide additional storage but a more car-like look complete with the option of a new-generation integrated MIB3 infotainment system with a 9.2-inch touchscreen, and even digital dials to replace the conventional gauges.

Under the skin, things get even more interesting. Like the latest VW Crafter, the T6.1 adopts electromechanical power steering in place of the older hydraulicall-assisted system. This enables a number of new safety and convenience features, including automatic Crosswind Assist (as standard), lane-keeping assist and automatic parking.

Let’s get into the details.

What engines are available in the 2020 VW Transporter T6.1 and do they meet the latest emissions regulations?

VW has rationalised – and improved – the 2.0-litre TDI turbocharged diesel engine line-up in the T6.1, with a revised range of motors that all meet the forthcoming Euro 6d-Temp emissions regulations well ahead of time.

Power output now ranges from 90hp to 199hp – which is more at the lower end, but less at the top (though we wouldn’t bet against a more powerful model in the future). Here’s the full line-up versus the equivalent engines in the current T6 model:

The 150hp engine is available with the options of a DSG automatic transmission and 4Motion four-wheel drive; the 199hp motor gets DSG as part of the package, with 4Motion also optional. All the others use a manual gearbox, and as with the previous Transporter, front-wheel drive is standard.

The 199hp unit is a BiTDI, using two turbochargers, rather than the single turbo of the rest of the range. This is the same as the previous 204hp model, but obviously with a little less power, a reduction necessary to meet the latest emissions regulations. In practice we doubt you’ll notice much difference in outright performance.

Will there be an electric version of the VW Transporter T6.1?

Yes, there will be an electric version. Set to be called the e-Transporter, it will be built for Volkswagen by partner firm ABT.

This will come in two variants, one prioritising payload, the other prioritising driving range, and is expected to go on sale in the UK in early 2020.

What there won’t be is a plug-in hybrid electric vehicle (PHEV) version of the new Transporter, as there now is for the Ford Transit Custom. The latest Transit Custom is also offered with mild-hybrid drivetrains as well; only third-parties are set to make this available for the Transporter..

Tell us more about the new design of the VW T6.1

The bigger grille is surrounded by a number of new features. Particularly noticeable is the double chrome bar, which runs across the front of the van and melds neatly into the new design of LED daytime running lights, fitted inside an equally new design of narrower headlight. 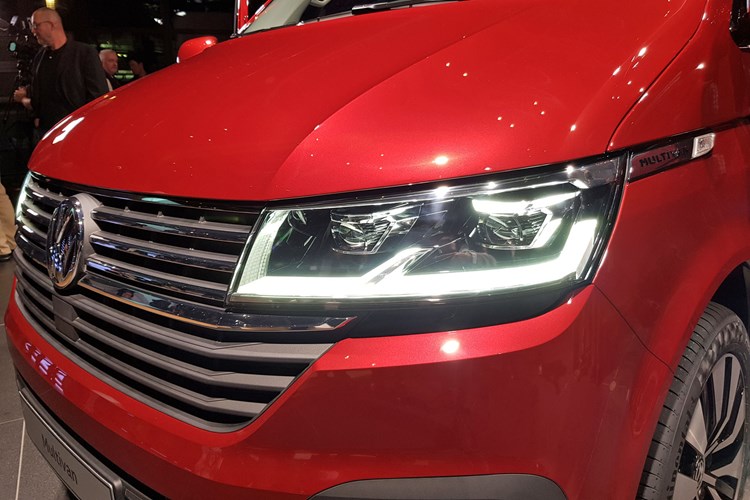 It is instantly a more modern looking van while remaining a clear relation of the previous version. Depending on spec, you can expect more chrome areas to be added to the front of lifestyle and passenger carrying variants. 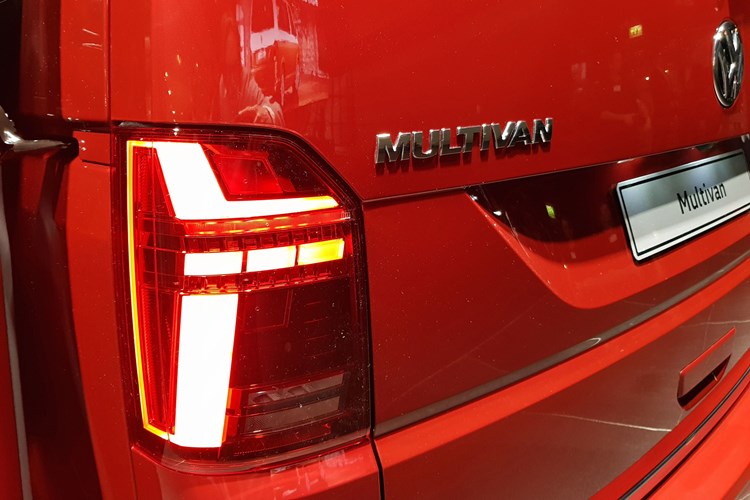 At the rear there are fewer changes, but you won’t miss the new design of LED taillights, which have a sort of T motif. Don’t expect to see these on every trim level, but they do look very smart.

New wheel designs and colours finish off the exterior makeover.

What’s different about the interior of the VW Transporter T6.1?

The entire dashboard is new here – and although we saw it first in fancy Caravelle form, which means a more premium finish that you’ll get as standard in a van, it’s clear from the latest round of Transporter images that the overal look is exactly the same for the van version (see image at the top of page). 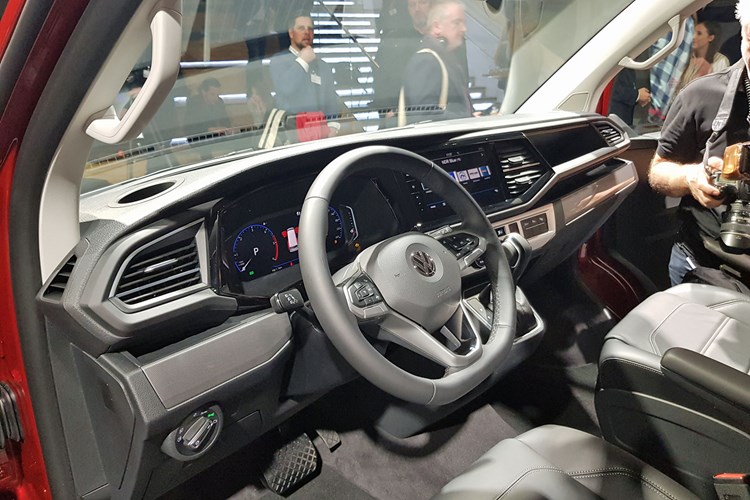 Taking a cue from the latest, super-practical Crafter, the new T6.1 dashboard contains even more storage space, including cubbies above the instrument binnacle, beside the gearlever and above the glovebox – where you’ll also find a little Crafter-like shelf.

However, while the Crafter is entirely pragmatic and functional, the changes to the T6.1 have been made while also adding extra style, making the cab feel much like a traditional van. 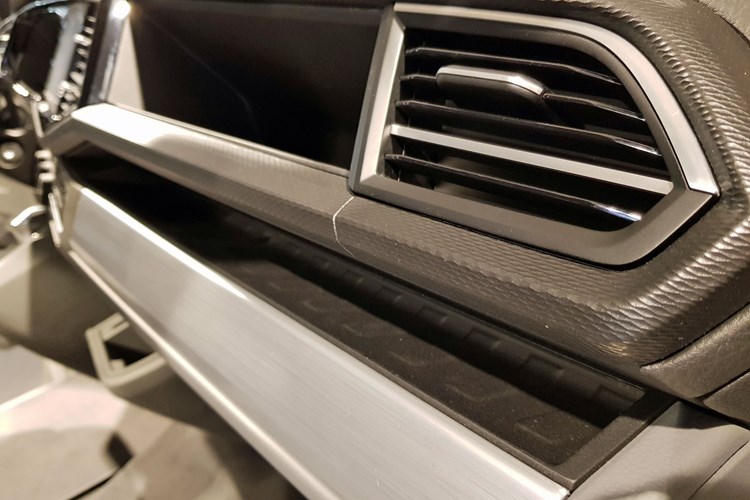 We strongly suspect these changes will be very popular with buyers – though you’ll need to go big with the screens to make the most of the new look.

Volkswagen has gone fully high-tech here. The Transporter T6.1 is only the second VW model to get the firm’s new MIB3 infotainment system (after the latest Passat), which is available with an 8.0-inch or 9.2-inch touchscreen display and redesigned menu system, plus the option to apps like a smartphone. 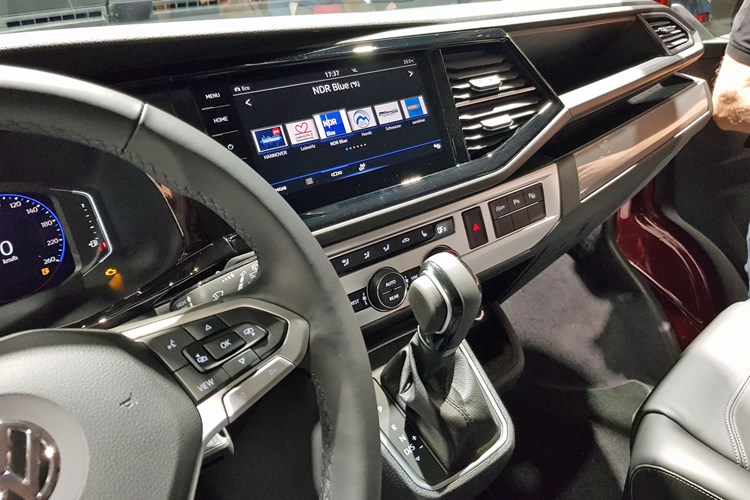 The new system has a built-in SIM card (eSIM), giving the T6.1 built-in mobile internet access, enabling a number of online services – including a new natural speech voice control system. This will allow you to say ‘Hey Volkswagen’ (or possibly even ‘Hey van’, but VW is still working on that) and simply talk to give the infotainment instructions.

The latest Sprinter has a similar ‘Hey Mercedes’ system that gives rather mixed results, so we’ll be interested to see how this works out.

Beyond this, the new MIB3-equipped Transporters will offer a wireless Apple CarPlay interface. This is very new, as most cars only allow this with a wired connection at present.

So much mobile data transfer is possible in this van, in fact, that VW has had to incorporate some very powerful antennas into the vehicle – which explains the unusual black carbuncle you may have spotted at the top of the windscreen. An effort has been made to minimise the increase in vehicle height but you can see that it does still stand slightly proud of the roof. 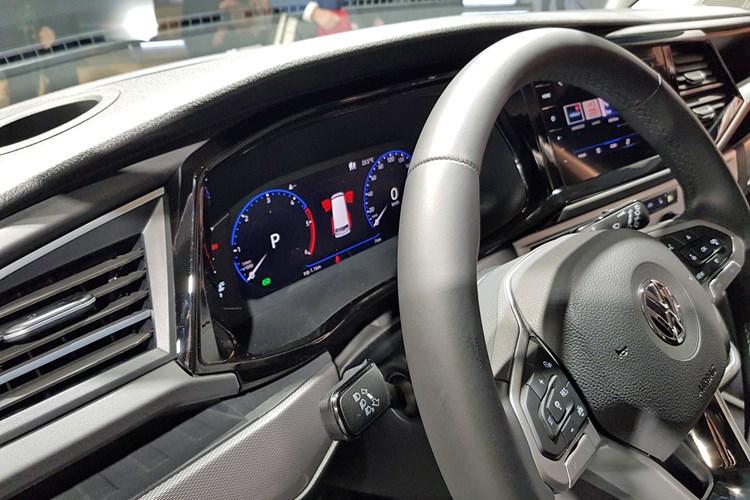 Caravelle and California buyers will also have the option of a Digital Cockpit – a 10.2-inch display that replaces the conventional instrument cluster with a customisable selection of graphic interfaces. At present this isn’t planned to be offered on the van, however, which might be a disappointment to some lifestyle buyers.

What are the new safety features for the VW Transporter T6.1?

The additional of electromechanical power steering means the van is able to control the steering for you in certain situations – mostly safety related but with some convenience aspects as well.

And don’t panic about control being taken away from you, the driver; this tech has been in use in cars for years, and has already appeared on the larger Crafter and Sprinter vans. 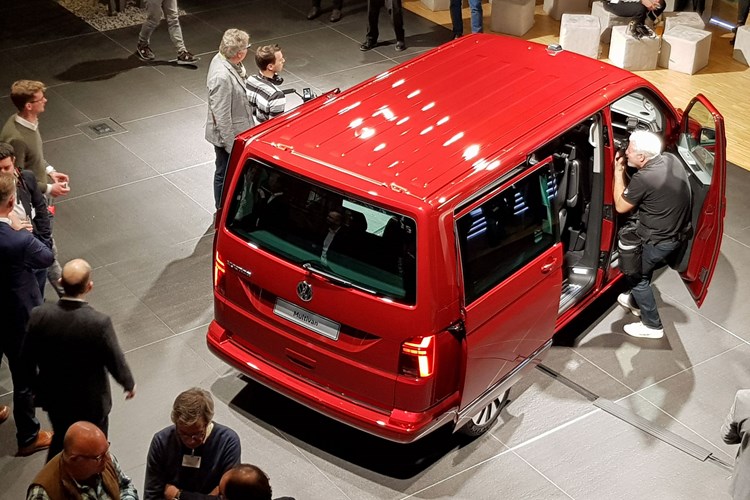 Chief safety advantage is the addition of standard-fit Crosswind Assist – the steering is able to actively counteract side winds as required, be they caused by passing trucks or storm-force gales.

In addition to this however, the T6.1 is available with lane-keeping assist, which can actively prevent the van from straying out of its lane on the motorway (great for long-distance safety).

The electromechanical steering also makes VW’s Trailer Assist system possible. This makes reversing with a trailer easy by allowing you to use the electric mirror controller like a joystick to point the van in the direction you want the trailer to go. The van then takes care of all the steering inputs needed to get there. We’ve tried this on the Crafter and the MAN TGE, and it is amazing.

Finally, the new steering means automatic parking is available on the Transporter for the first time as well. 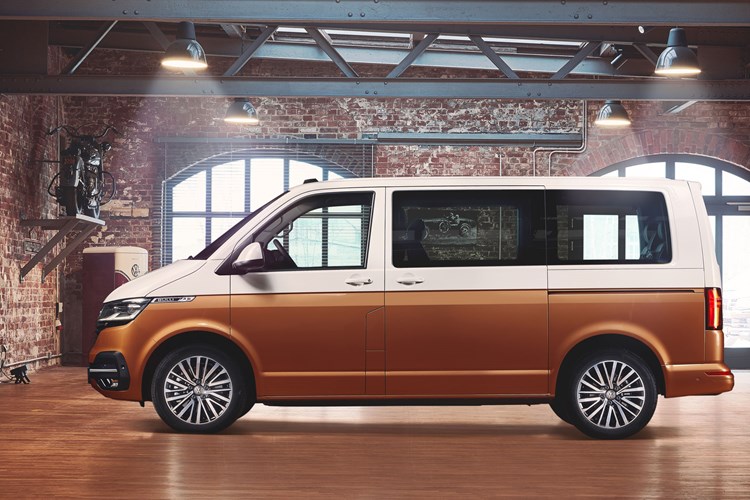 Other new safety kit includes active rear cross-traffic braking to make backing out of parking spaces safer, and the option of the same ultrasonic side protection system as the Crafter, which helps you avoid objects that are out of site all the way around the van, rather than just in front or behind it.

As before, all Transporters will be fitted with autonomous emergency braking (AEB) as standard.

Any new practicality features for the 2020 T6.1 VW Transporter?

It’s not just about fancy gadgets here – the T6.1 upgrade has some carefully crafted working features as well. 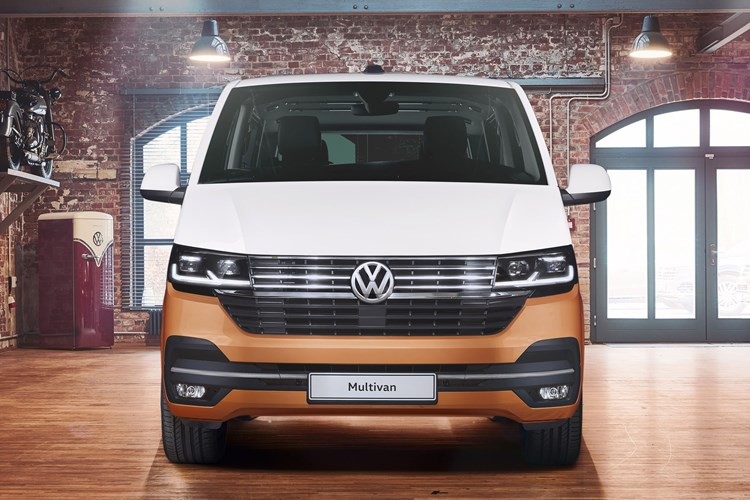 On top of this, there’s a new ‘Courier package’, which includes ‘more robust’ alternator, battery and driveshafts. Not sure exactly what VW is saying about your typical courier driver here, but those do sound like useful enhancements for hard-driving, frequent-stopping situations.

When does the VW Transporter T6.1 go on sale, and what does it cost?

Pricing for the panel van starts at £21,635 excluding VAT and on-the-road costs for the entry-level 90hp Startline, rising to £36,915 for the top-spec model 199hp Highline in long-wheelbase form.

The first deliveries are expected in dealers in March 2020.

Volkswagen shows the future flagship of the I.D. Family

10 Best and Worst Things About the Volkswagen Passat 2018